Voice of the Monitored

Keeping an eye on the monitors

(click here to view Monica Jahner interview)   Monica Jahner spent nearly three decades in prison. Since she gained her freedom six years ago, she’s worked night and day at Northwest Initiative, a Lansing, Michigan- based program that provides reentry services for people on parole from state prison as well as individuals facing cases in the local courts. In the course of her work she’s encountered dozens of people on electronic monitoring regimes. She has an abundance of stories of the ways in which the monitor places unreasonable obstacles in front of people trying to do the right thing. Perhaps her most incredible example is the person on a monitor whose house burnt down, thereby cutting off the signal from his box to the reporting center. When he showed up the next day at the police station to report his change of address, the authorities took him off to jail because the rules of his electronic monitoring program didn’t permit him to be outside of his house at that time.
While not all her clients face such inappropriate responses, she emphasizes that the hurdles individuals confront to get employment or participate in family activities grind people down. “They have to jump through a million hoops,” she says recalling one individual who was called for a job interview on short notice on a Sunday. The supervisor for his monitoring program wasn’t available on Sundays. Since, as with most people on monitors, he wasn’t able to leave his house without permission, he had to make the difficult choice: break the rules and run the risk of being locked up or foregoing the all too rare opportunity for a person with a felony conviction to get a job interview. He ended up going to the job interview and luckily only got a tongue-lashing rather for breaking the rules. She recounts the story of another person on a monitor wanted to get a job cutting lawns. The monitoring requirements meant that he had to get clearance from his parole officer to visit every address where he would be cutting grass. That could mean 30 or 40 houses in a week, an almost insurmountable paperwork load for both the person on the monitor and the employer. Such requirements, along with the typical parole conditions that a person’s place of employment can be searched at any time without a warrant, make even the most sympathetic employers hesitant to deal with people on an ankle bracelet.
Most people on monitoring also have a curfew which stipulates they must be back in their house every day by 2 p.m. This makes it difficult to be involved in family or community activities. Monica questions the use of the curfew. “Are we making the streets any safer by saying you can’t go out with your family?” she asks, “Staying out until 8:30 shouldn’t be a problem.”
She attributes the excessive controls that often come with monitoring to a “fear mongering” which is fueled by popular “attitudes toward felons.” She notes that even some pastors have succumbed to this fear since a person’s monitor may sound an alarm in the middle of a church service, prompting nervous responses among the congregation.
This same fear has also spilled over into programs she runs. She once set up a lunch program for children but many people kept their kids away because people with felony convictions were serving meals. Monica said people in her reentry program were tired of hearing that “kids can’t come into our sight,” even when they don’t have any criminal history involving children. 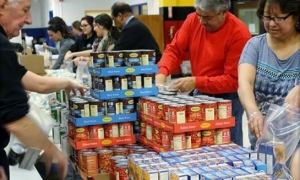 She has even found that some people become so despondent under the restrictions of the monitor that they prefer to just give up and be returned to custody. Some people find it “easier sitting in a jail cell,” she says, especially when they “can’t keep a job because the thing is going off all day.” She told the story of one person with a sex offense history who spent thirty years behind bars. In a moment of despair he told her “it’s either gonna be suicide or I go back to prison. Nobody wants to give me the chance to change.” The authorities not only had him on a monitor with a strict curfew but he was not allowed to have a computer and was forced to get permission to even have a conversation with a neighbor. One day he said he stopped at a house on his street where the owner was holding a yard sale. He looked at a few items and had a short conversation with the owner. The next day his parole officer phoned him and asked him why, according to the GPS records, he had spent eight minutes at an unapproved address. When he explained the details, the parole officer pressed him to make sure that he had revealed to the neighbor that he was a person with sex offense on parole with electronic monitoring.
Monica stresses that all of these situations are made worse by the lack of consistency in policy. “Every parole officer has a different set of rules,” she says, bemoaning the absence of clear cut guidelines or any consideration of how conditions for various individuals may be very different.
Ultimately Monica thinks that electronic monitoring needs a re-think. She suggests it would help if the system was centralized with one set of rules. She also believes that conditions must fit different peoples’ needs, that a one-size-fits-all approach is not working. As it stands, she says, it is “virtually impossible for people on GPS to try to cope with society.”

She also argues that the problems with electronic monitoring constitute a subset of a bigger issue with reentry in general. She highlights the lack of understanding of the realities of returning citizens on the part of many involved in reentry and supports the idea of programs run by people who have been through the prison system. As she puts it “people who have walked the walk, who understand.” Likely if people like Monica had more influence over the rules and regulations concerning electronic monitoring and parole in general, far fewer people would end up going back to prison.